REVIEW: A million things I love about this classic yet contemporary jazz / soul project 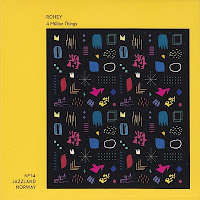 As well as celebrating and exploring new releases at Influenced, we love revisiting both household names and lesser known classics.
Today I’d like to share my thoughts about an album from 2017 that I truly adore.

Despite being an absolute delight, Rohey’s ‘A Million Things’ did not receive as much recognition outside the Jazz / Soul scene as I believe it genuinely deserved.

It was Giles Peterson’s Worldwide show that introduced me to Rohey in early 2017.

Over numerous weeks Giles played multiple tracks from the album and each one caught my attention. The tracks straddled both soul and jazz, but I could hear so many more sounds, genres and influences in there.

Intrigued, I got the album and I’ve been a follower of the Norwegian quartet ever since. Researching the band via the power of google and Wikipedia, I was amazed to discover that such a polished album was made only three years after the band’s formation.

‘A Million Things’ merges deep soul roots with modern day neo-soul vibes. At times Rohey Taalah’s exquisite, classily delivered vocals remind me of the great neo soul songstresses of the 90’s and noughties, and yet there is something about her that strongly evokes Roberta Flack. Over the live instruments of the quartet, especially the keys, her voice is quite mesmerising and a perfect fit for this material.

Whilst not a project one could dub as “cutting edge” or “ground breaking”, the album is full of emotion and energy. The musicality and arrangements give the whole project a real youthfulness and fresh feel, akin to New Jazz. The album reimagines its influences with new vigour and from a different perspective.

With soul as the key ingredient, old school sonics you’d expect from Roy Ayers in the 1970’s are mixed with a contemporary European urban undertone, that take me back to Courtney Pine's first album 'Underground' - although it’s a lot more structured / less improvised than the aforementioned.


With soul as the key ingredient, old school sonics you’d expect from Roy Ayers in the 1970’s are mixed with a contemporary European urban undertone that take me back to Courtney Pine's first album 'Underground'.

Whilst the band’s name is taken from the lead singer, 'Rohey' is Arabic for 'my soul', which every band member pours into this album.

‘A Million Things’ feels to me as though it was constructed in an urban environment but written and performed in the Scandinavian wilderness.  A good point of reference would be the youtube channel Mahogany, for those familiar with the channel.

When listening to the track ‘Afterthought’ I imagine a very ‘Hygge’ scene:  the band chilling in a cabin surrounded by white snow, with log fire blazing. Water from a nearby lake or fjord provides a gentle soundtrack as they talk, have fun and jam.

I don’t want to spoil the project, but stand out tracks for me are "Tell Me" and "Responsibilities". "Tell Me" is soft, slow and sensual. The intro keys set the seductive tone. Then the classic jazz vocal, full of pain and heart, is packed with emotion. You need prepare yourself for this one and take time to enjoy it - dim the lights, pour that glass of red and just get lost in your feels.

"Responsibilities" is a neo soul track worthy of Jill Scott, Erykah Badu or Amy Winehouse. This is a big statement, but true.

Please do take the time to listen to this wonderful body of work and let me know what you think.