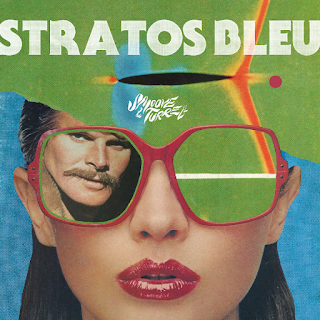 At ‘Influenced’ we try to keep our music taste as fluid as possible.

We try consuming as much music as we can - whether it’s from household names, or from artists that deserve to be.

Smoove & Turrell are the latter.

I've been following them since 2009, back when they dropped their second studio album “Beggerman”.

The band, hailing from Gateshead, have refered to their musical style as ”Northern Funk” in interviews,

I like this expression; befitting their fusion of funk, soul, northern soul, hip-hop, disco and electronica.

I like this 'Northern Funk' term - a term from the band themselves.  Befitting their fusion of funk, soul, Northern soul, hip-hop, disco and electronica.

On their sixth studio album the band have gravitated towards the dance, electronic, disco side of their music.

George Clinton once said that “Style is whatever you want to do, if you can do it with confidence”.

I feel this maxim perfectly encapsulates what 'Stratos Bleu' era Smoove & Turrell and - on a slight tangent - Disclosure have done in recent years. Both acts fusing music they love and are attached to although outside the genre they have previously been most associated with.

Smoove & Turrell 'Stratos Bleu' is electronic - funk done with soul and a whole lot of confidence.

Now I’m not going to spoil it and go through the album track by track. Just know it delivers an irresistible energy thanks to their electro soul-funk machine.

They offer an array of grooves and all sound as good as the next. There are a couple skip-worther tracks in my opinion (for instance, 'Elgin Towers'). These couple of moments do not spoil the listener experience.

'Stratos Bleu' oozes positivity, with happy vibes that we could all most definitely do with in current times. The project offers something new to longterm fans and at the same time, serves as a great introduction to fans in the making.