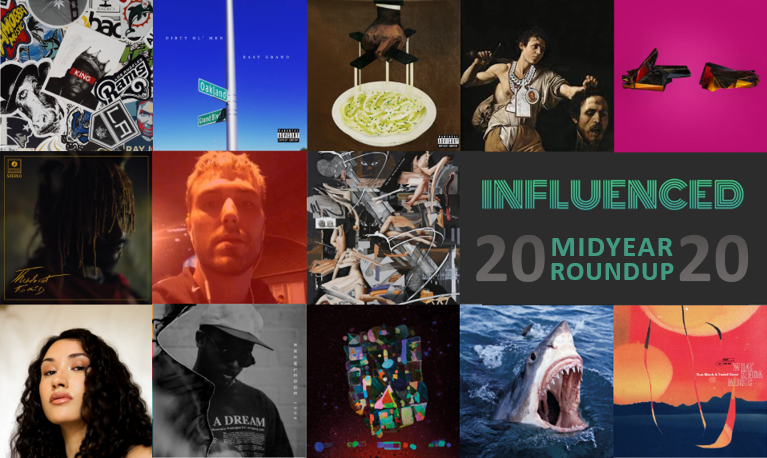 2020 has been a year of turmoil.  We have simultaneously fought a global pandemic and challenged ourselves as a society, with many expressing unrest by hitting the streets, offices and internet in various modes of protest.

Contemporary music has always played a multi-faceted role in times of great struggle and this year is no exception.

At times music has served as escapism and a welcome distraction to the listeners' woes and worries.

At other times, the more painful and harsh realities of the modern world have been documented by the often repressed and under-represented voices in mainstream society.

It has also celebrated the tenacity of the human spirit which, through seemingly insurmountable odds, somehow keeps going.

The work listed below incorporates all of the above, with many of the projects interweaving two or more of these strands.

These releases, some of which we have already reviewed, are all contenders for album / musical moment of the year.

Listen to my review and interview with Objects In Orbit himself here.


Boldy James and The Alchemist 'The Price of Tea in China'

"Alchemist, looking to be a shoo-in for hip hop producer of the year, reunites with longtime collaborator, underrated Detroit lyricist Boldy James.  The first of three projects helmed by Alchemist in our list at the halfway mark(!) '...Tea in China' finds an introspective James documenting fleeting highs and enduring lows of the Detroit hustler lifestyle, with tailor-made Alchemist production moving seamlessly from track to track like a sombre cinematic masterpiece.  As bleak and menacing as it is soulful, '...Tea in China' is another strong contender for album of the year for any genre, especially hip hop."

"Centred around a weekend get-together in July 2019 that is one part extended family reunion, one part sample flipping boot camp and one part musical pilgrimage to Detroit (including visits to Motown USA and Dilla's Delights donut shop), The Dirty Ol' Men collective exemplify brotherhood and community.  From good old braggadocio boom bap ('Superpredators') and heartbreaking social commentary ('Cherries & Blueberries') through to throwback rare groove ('Model'), 'East Grand' as an album and accompanying documentary is both artistically satisfying and serves as poignant documentation of pre-Covid living."

Little Dragon 'New Me, Same Us'

"Little Dragon are a Swedish four-piece who returned this year with their sixth studio album, 'New Me, Same Us'.  The band are renowned for their chilled neo-soul, psychedelic jazz soul fusion.  After a three year hiatus the band return with an album that is unmistakably them.  Underpinned by Yukimi Nagano’s silky smooth tones, the new release is a melange of chilled beats and soulful harmonies.

I feel the band have provided us with an album that clearly shows what they are brilliant at.  It feels like over the past 5 albums they have experimented with their sound and found the perfect balance in this album.  Definitely one of my top choice from the year so far."

"This one is for the beatmakers and those that have a passion for production.  This LA based producer is well known within the hip hop scene, especially for his collaboration with Anderson Paak as 'NxWorries'.

Here, he gives us 22 tracks, pretty much all gems.  Meat and potatoes hip hop beats on a lofi vibe are laced with 90’s RnB vocal samples.  It's a modern extension of the West Coat hip hop we know and love.  This one won’t be for everybody but if it sounds like your thing, on a Sunday afternoon while you’re doing your chores or enjoying a glass of red, pop this on and let the background beat take you on an adventure of the mind."

Cleo Sol 'Rose In The Dark'

Conway The Machine and The Alchemist 'LULU'

"As exemplified by its artwork, 'LULU' turns up the quiet menace from '...Tea in China'.  Alchemist's production somehow manages to be both understated and nightmarishly psychedelic, in no small part thanks to his perfecting of the echoed punchlines and ad-libs that The Machine delivers so convincingly throughout the project.  In another trailblazing year for Griselda Records, it sometimes seems like Conway's only competition is Conway himself.  He carries the vocals almost single-handedly, with only one guest verse from the always welcome Queensbridge legend, Cormega."

Thundercat 'It Is What It Is'

"Thundercat is a star in my eyes.  The bassist / singer songwriter drops another album that reinforces his status as one of the top talents of the 21st century.  It's Jazz, RnB, Soul and Funk with deep vocals that wallow in pain and emotion, yet there is always an escapism available thanks to the comic elements within his sophisticated production.  If you don’t know this artist, do check out this and his back catalogue as, in my eyes, he can do no wrong."

"Everybody's favourite rapping CEO continues to present albums as works of art, one part Kool G Rap and one part pre-Trump era Kanye West. You would be hard-pressed to find a better triptych of bangers than on the first third of this Easter offering, with the bittersweet melody and misanthropy of 'No Vacancy', the Griselda triad reunited on 'George Bondo' and Tyler The Creator spilling glitter over a post-Dilla low-fi beat on '327'. Impressive stuff for an artist who admits he never wanted to rap!"

"I've been a fan of Tom Misch since his early release on Soulection.  I also discovered Yussef Dayes from the UK jazz group United Vibrations via the Soulection radio show.  When I found out they were doing a project together I was excited at the prospect of Tom’s ear friendly glowing musicality meeting a more experimental musician in Yussef.  And that’s exactly what we get.  The focus of the whole album is musicality.  I have read some reviews saying that they found the album disengaging but I don’t think that’s accurate at all.

'What Kinda Music' is a blend between two artists of unique calibre, bringing both their sounds together to create something entirely new.  Do I think that the duo should do regular projects?  No, I don't.  I think they are both extremely talented and their artistry is exemplified here, as they excel on a joint project while keeping their own musical identity."

"A cryptic, personal and addictive EP by the coveted producer"

Freddie Gibbs and The Alchemist 'Alfredo'

"Sprinkling throwback soul and rock samples into the menace found on 'LULU', Alchemist encapsulates what separates the producers from the beatmakers.  He is able to maintain his own identity from project to project whilst tailoring his sound to perfectly complement each lyricist's individuality.  Conversely, Gibbs continues to flaunt his gift for making himself at home over a myriad of producers' styles, further cementing his legacy as an MC's MC and proving yet again the adage that success is a marathon not a sprint."

"The latest and, in my opinion, the greatest instalment in the Run the Jewels series perfectly balances righteous fury with streetwise humour.  The chemistry between Killer Mike and El-P, both lyrically and production-wise, is near perfect, neither missing a beat nor pulling a punch.  They are joined by an ensemble cast which is as diverse as it is stellar (Pharell Williams, Zack de la Rocha and Mavis Staples, to name a few).  The beats are bigger and brighter and bang even harder than previous RTJ offerings.  An album as defiant as it is embattled, 'RTJ4' is arguably the most 2020 album of 2020."


Be sure to join us in sharing, celebrating and exploring the music we love on social media: