PODCAST: Let battle commence! A fun-filled, passionate debate on the legacies of Jam and Lewis, Nile Rodgers and Teddy Riley 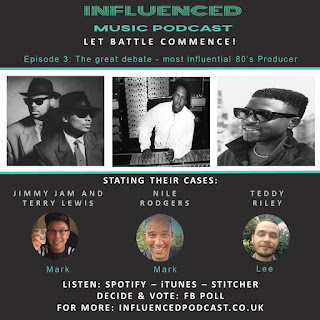 Let's get ready to rumbbbbbllllllllle!

In a very animated episode, Mark Williams is joined by Lee and Mark Anthony to celebrate, discuss and at times roast - in a respectful manner if that's not too much of an oxymoron - the legacy of three iconic music producers.

The aim was to state the most convinicing case on which producer - active during the 1980's - was most influential.

We have left the meaning of 'active during' to be quite loose and open to listener interpretation, as all three producers have had decades-spanning success and influence.

The show takes the form of a monologue by each of the panelists, followed by cross examination, celebration - and a little bit of trash talking here and there too - by the rest of the team.

Who is arguing what?

Check out the show below and decide for yourself! A poll is coming soon too.


Here is the accompanying playlist for the show:


And here's all the shows and playlists ths far on iTunes: