Music Documentaries to Check Out

Netflix have a huge range of fantastic music documentaries - here are just some I recommend. 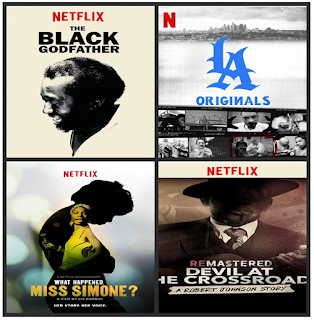 Here is a man who has helped and promoted a plethora of talent behind the scenes.  The documentary features testimonies from high-profile figures such as record producers, artists, execs and more - including former US Presidents.

A fantastic, must-watch about an amazing figure.

If you grew up a hip hop fan in the 1990's it is very likely that you are aware of the iconic work of Photographer Estevan Oriol or the artist Mister Cartoon AKA Cartoon.  This documentary tells their story.

Both artists were already established in the industry when they met in 1992, but together they made the world aware of lowrider culture, which is now a mainstay in hip hop and LA and accepted and respected the world over.  Cartoon started out as a graffiti artist and transitioned to being the tattoo artist du jour of hip hop superstars (Eminem, 50 Cent, Wu Tang Clan) and those who wanted to be as cool as them.  Estevan is a former road manager for House of Pain and Cypress Hill who became the two acts’ de facto staff photographer, and spun the exposure (no pun intended) into a career of magazine photo shoots and music video director gigs.

This great documentary gives the viewers an insight into a part of LA that we, as 'cultural tourists', are not generally exposed to.  Musically, artistically and culturally this is a winner.

Within the current social climate there is probably not a music documentary more relevant then this one.  On stage Nina Simone was known for her uninhibited musical expression, which enthralled audiences and attracted life-long fans.  This documentary presents a collection of unreleased videos timelined to show her struggle both as an artist and an activist in the civil rights movement.  She is a legend in a multidimensional sense and this documentary reinforces that.

Devil at the Crossroads

A look at the short, mysterious life of blues legend Robert Johnson, who was said to have made a deal with the Devil at a crossroads in rural Mississippi to achieve musical success.  The myth, urban legend and story are something all music fans should be aware of.  However, this fantastic documentary goes beyond that, exploring what the sounds of the man dubbed 'The Father of Blues' mean to the world of music; and what they evolved into.

Other documentaries on Netflix to check out: