REVIEW: No Hoarding Part 1 and Part 2 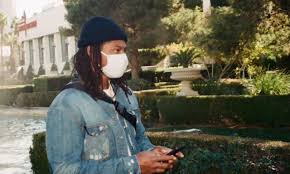 At ‘Influenced’ we loved finding new artist and are fond of a talented beatmaker for this review we venture into the double EP release from Foolie $urfin. The Hip Hop and RnB experimental producer has wowed us with these project and it is time to praise the Oceanside , California native.

Born Charles Lenford Jr Foolie’s ever evolving style has no bounds, from singing to producing his creativity is always on full display. The young man, much like Mac Ayers has done so much and has a few project under his belt at such a young age and each one is better then the last. That being said he’s constantly impressing with his immersive productions whether as solo work or as part of Bonsai Collective and wishnomore collective, Foolie $urfin joined forces with Jus Lovehall last year to release his 14-track album Stay Safe, as well as was included on LM021 with his track “Transcendence.”

Now, Foolie $urfin is back with two exciting new Ep’s / beat tapes, “NO MORE HOARDING” and “NO MORE HOARDING PT.2.” The two projects total 17 tracks and  undoubtedly showcase Foolie $urfin’s versatility. Now if you listened episode 28 and 29 of our show (Future Beats episodes) Foolie’s music would sit exceptionally well there. Without doubt an artists that will be a fan of the greats such as JDilla, Madlib, MF Doom and 9th Wonder. These beat tapes see him bring together playful melodies, distorted 808s and hard-hitting drums just as well as his peers such as Knxwledge or Phdirac. I’m a fan of “Tetris” from the first beat tape due to the nostalgia it brings and well as the creativity to make it such an appealing track. A mention for “Treninetynine” is also required the tempo of the high hats on this set the track, the subtle melodcis keys that follow is the perfect finishing touch.

From “NO MORE HOARDING PT.2.” there isn’t a standout track from but as a project I feel it works a lot better than part 1. As a body of work, it’s a beautiful listen from start to finish, less bangers but a lot more cohesive. I think both projects are exceptional, long enough for Foolie to express his talent and short enough to keep your focus.